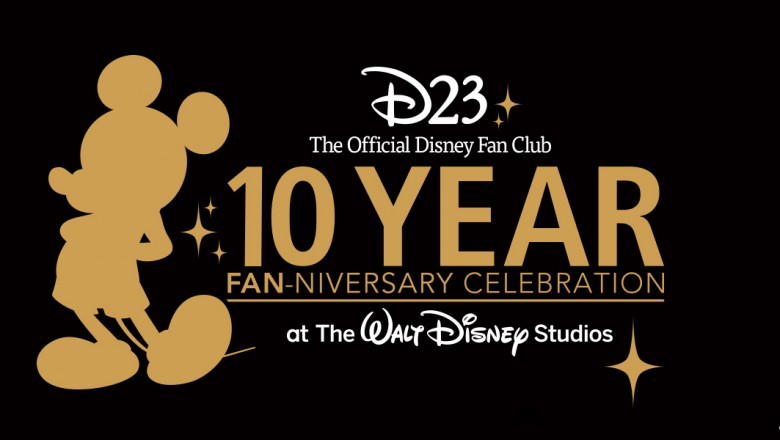 D23 has a fan-tastic surprise for their members! To celebrate the official Disney fan club’s 10th anniversary they are hosting the ultimate anniversary bash at the The Walt Disney Studios in Burbank.

During the “D23 Members will have the rare opportunity to meet some of their favorite Disney luminaries and honored guests who have been a part of D23’s 10 magical years.

In addition, the Walt Disney Archives will display some fan-favorite items and treasures from inside the Disney vaults—selected just for this event. You’ll also have the opportunity to see their curated window exhibits celebrating the 50th anniversary of the Haunted Mansion at Disneyland and continuing the 90th birthday celebration of Mickey Mouse—both located inside the Frank G. Wells Building.

Of course, the evening wouldn’t be complete without a D23-exclusive gift created exclusively for our special anniversary, and all guests will take home your commemorative “D23 10-Year FAN- Celebration” event credential!”

PLEASE BE ADVISED: Filming, photography, and other recording will take place at The Walt Disney Studios during the event you will be attending. The Walt Disney Company will be taking photos and filming at The Walt Disney Studios located at 500 S. Buena Vista Street, Burbank, California. By entering the premises, you irrevocably consent to and authorize The Walt Disney Company, its affiliates, successors, and assigns (collectively “Producer”), to photograph you, make sound recordings of you, and use such photographs and recordings throughout the world, for any purpose whatsoever in perpetuity, including, but not limited to, television broadcasts and home entertainment products, including, but not limited to, home video and DVD. All such photographs and sound recordings will be the sole property of Producer.