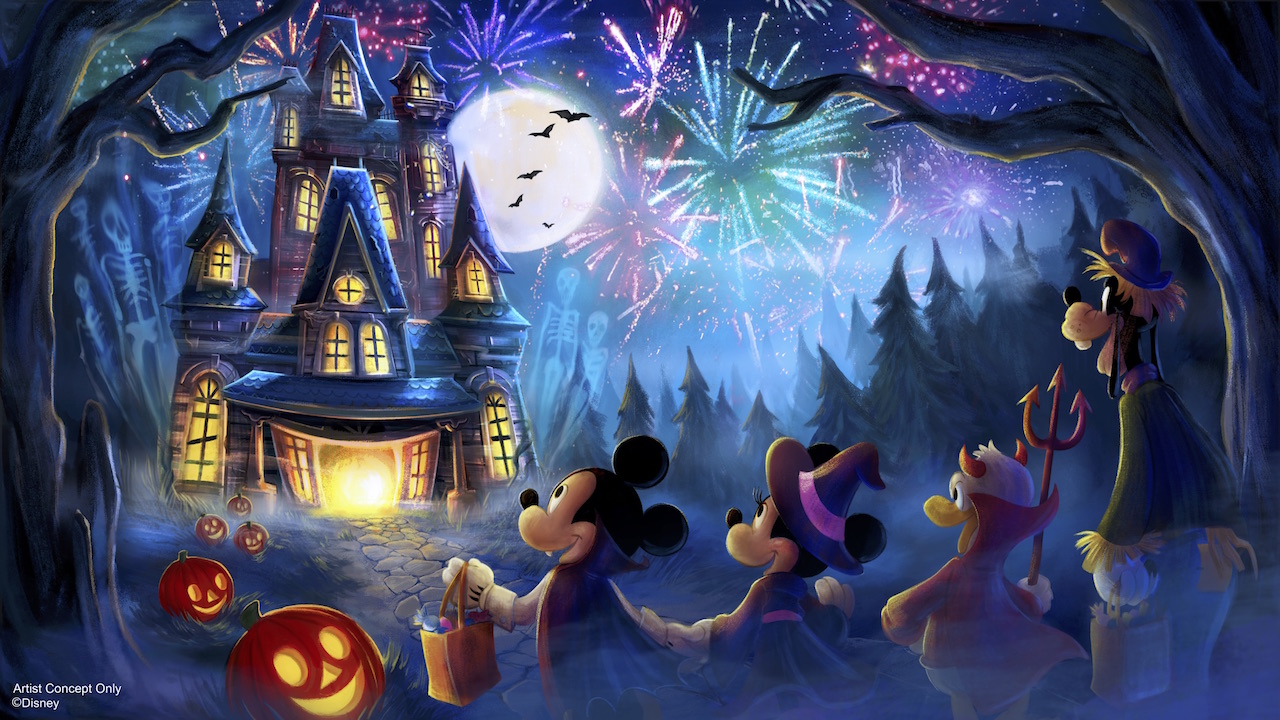 Disney has announced today that a new fireworks spectacular is coming to Mickey’s Not-So-Scary Halloween Party, you might remember that we predicted this a number of weeks ago. The new show will feature state-of-the-art projection effects, lasers, lighting and dazzling fireworks that come together to tell a not-so-scary story about how anything can happen on Halloween night.

The Disney Parks Blog said that the show will take guests along on a trick-or-treating adventure, where four friends – Mickey, Minnie, Donald and Goofy – find themselves drawn into a mysterious haunted house. The journey takes them from one room of the house to another, encountering dancing skeletons, waltzing ghosts and a whole series of troublemaking Disney villains. Guests can see the the first “scene” in the concept art above. If you’re reading in our app, the image is attached to the headline in your Monorail News Feed.

The spooky fun event, that happens on select nights from August 16 to November 1, will feature returning favorites along with all-new experiences, in addition to the new fireworks spectacular.

Other returning favorites include:

·     “Mickey’s Boo-to-You Halloween Parade,” which happens twice nightly and features favorite Disney characters dressed in their Halloween best, along with the Disney villains and a cavalcade of fiendishly fun floats.

·     Storybook Circus Disney Junior Jam in Fantasyland is the spot for all of the young partygoers to get their groove on with favorite Disney Junior characters like Doc McStuffins and Vampirina.

·     Trick-or-treating throughout the park!

And last but not least, the parties will feature attraction enhancements just for the Halloween party! Stay tuned to the Disney Parks Blog for more details!Mickey’s Not-So-Scary Halloween Party tickets start at $79. To buy tickets, visit Disneyworld.com or call the Disney Reservation Center at (407) 827-7350.