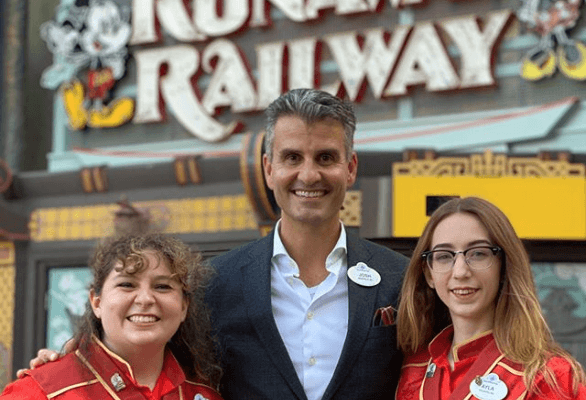 Josh D’Amaro may only have been on the job as the new President of Walt Disney World since last fall, but he is quickly filling his Instagram with pictures and videos from his many excursions into the Parks, as he reaches out to build connections with Cast Members at every level. Recognizing that the Cast Members truly are the secret behind the Magic, D’Amaro is striving to show them his appreciation by investing time and money to improve the Disney workplace experience, both behind-the-scenes and out in the Parks.

And with Disney’s Hollywood Studios preparing for the grand opening of Mickey and Minnie’s Runaway Railway next month, D’Amaro wants to share the excitement with the Cast Members of Walt Disney World in a special way!

After getting his own sneak peek at the Studios’ next big attraction a few weeks ago, along with some intense ride operation training, D’Amaro went into the Park to thank Disney Cast Members for what he calls an “amazing” new addition. He then spoke directly with two lucky Cast Members about their own ride-training experience. In a video recorded for his Instagram, D’Amaro begins by thanking all of the people involved in the creation of the “awesome” Mickey and Minnie’s Runaway Railway, and then asks Cast Members Rachel and Ayla for their impressions of the ride. You can watch that video here:

In the video post, both Cast Members are excited and ready for the new ride to open, and predict that Hollywood Studio Guests will absolutely love this first-ever Mickey-themed major attraction at a Disney Park, calling it one of the “best rides ever.” So in what seems to turn into a completely unexpected announcement, D’Amaro asks both women if they think all of the Cast Members should be able to experience Mickey and Minnie’s Runaway Railway before any Guests do! Of course, both Rachel and Ayla answer with a resounding, “Yeah! Can we make that happen?” To which, the President of Walt Disney World replies, ‘YES! I think I can make that happen, if you want it to!…I say we do it!”

And just like that, Walt Disney World Cast Members have been granted a little bit of magic of their own, from one of their own – who just happens to be the leader of the largest single-site workforce in America. As described on his Disney Parks, Experiences and Products profile, Josh D’Amaro is indeed proving himself to be “a champion for the Resort’s Cast Members,” as he recognizes that behind every happy Walt Disney World Guest is a valued and respected Cast Member.