Walt Disney World to ‘Pause’ Use of Virtual Queues for “Star Wars: Rise of the Resistance” 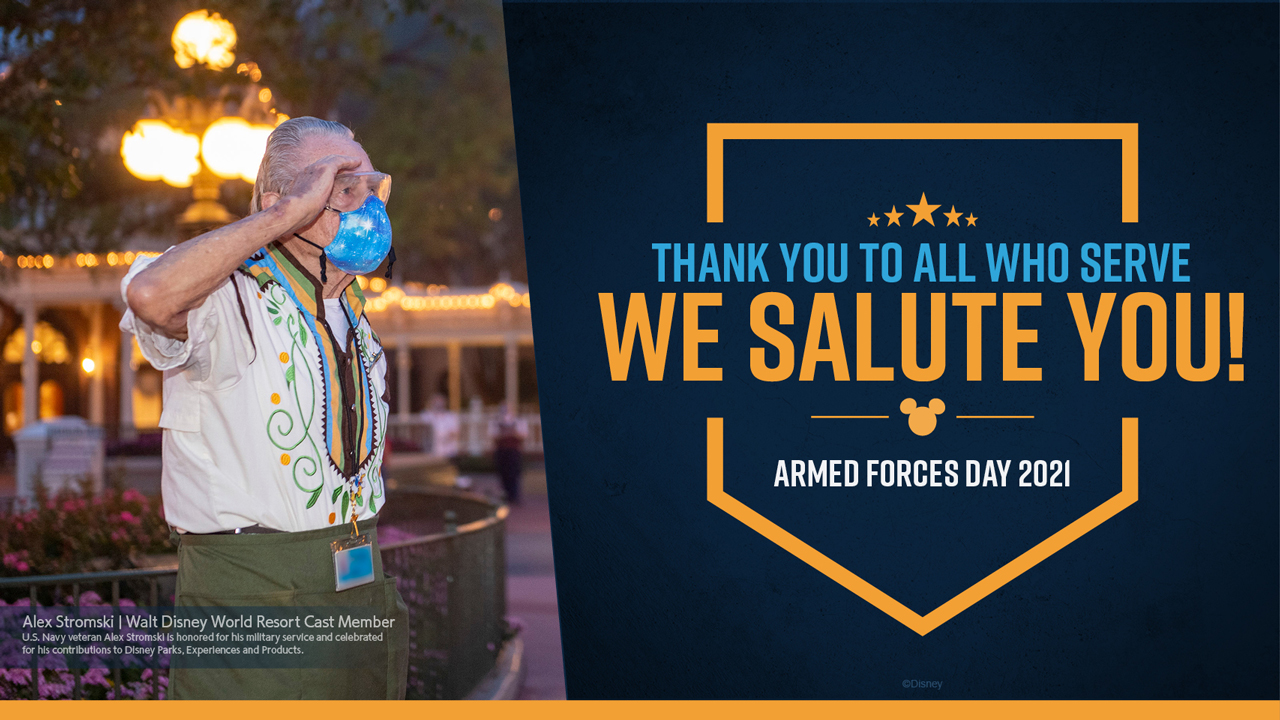 In honor of Armed Forces Day tomorrow, we’re remembering and honoring everyone who has served our country. We’re also shining a light on a special Disney cast member who served in the military during a pivotal time in U.S. history including World War II where he enlisted in the Navy at the end of the war and continued to serve until his military retirement in 1967.

U.S. Navy veteran Alex Stromski served in duty stations around the world and now serves our guests at Walt Disney World Resort in his role as a cast member at Pinocchio’s Village Haus in Magic Kingdom Park.

Recently, with Cinderella Castle looming through a lingering pre-dawn fog, Magic Kingdom Park hosted a special sunrise flag-raising ceremony to thank Alex for his service to our nation and to our company.  As friends and family looked on, he joined the Magic Kingdom flag detail in hoisting the colors over Town Square. Afterward, he and his family were recognized by park leadership and members of Disney’s SALUTE Veteran diversity group.

“I’m honored and humbled,” Alex said holding a shadowbox of a flag flown over the park the day prior in his honor.  “This is something I never would have expected.”

Alex enlisted in the Navy at the age of 17 at the end of WWII as he felt the calling to serve and follow in the footsteps of a friend who served in the Navy in between the first and second World Wars.  Alex later earned a commission as an officer and went to flight school at Naval Air Station Pensacola, where he was classmates with future astronaut and lunar pioneer Neil Armstrong.  Alex served around the world in maritime patrol squadrons, worked with experimental naval aircraft such as dirigibles, and served on the team responsible for keeping the peace in the demilitarized zone following the signing of the Korean War armistice.

Alex retired from the Navy in 1967 as a Lieutenant Commander.  After Walt Disney World opened in 1971, Alex became an annual passholder and frequently visited the resort with his family. His love of Disney and of service led him to apply for a job.

“I loved how Walt had great respect for the military,” Alex said.  “I realized that this was something I wanted to be a part of, so I applied and got a full-time job at Pinocchio’s Village Haus in 2013.”

Alex said his military experience has been a big benefit to him in his Disney role making magic for our guests.  “I love helping create the experiences that families will remember for years,” he said. “I especially enjoy meeting the military families and veterans who visit us.”

At Walt Disney World we are grateful that this outgoing, big-hearted hero is on our team.

Alex is one of thousands of military veterans who are now part of The Walt Disney Company. As we recognize National Military Appreciation Month, we offer a hearty salute to our cast Veterans and all those who have served, or continue to serve, in uniform to protect our nation’s freedoms.

And as part of The Walt Disney Company’s enduring legacy of support for the Armed Forces, we look forward to welcoming even more service members, families and caretakers to Walt Disney World Resort in September as the U.S. Army hosts the Department of Defense Warrior Games at ESPN Wide World of Sports Complex. Registration is also now open for the 2021 Veterans Institute Summit presented by Disney Institute on September 13-14, 2021 at Walt Disney World Resort. This complimentary event is geared towards those who want to learn how build or enhance their company’s own hiring, training and support of military veterans and spouses.