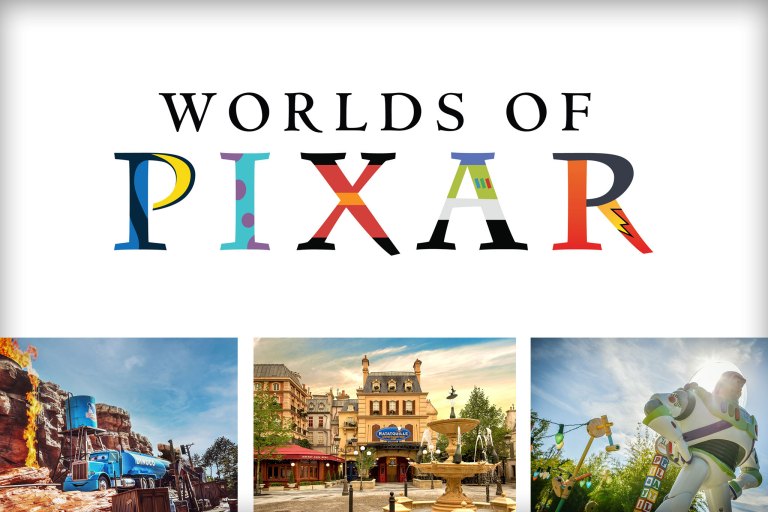 Disneyland Paris now has “one area for all Disney-Pixar storytelling,” and they have named it Worlds of Pixar. Much of Toon Studio at Walt Disney Studios Park, including the new-this-summer Cars Road Trip, Finding Nemo, Toy Story and Ratatouille attractions, will all be part of this Pixar land, which officially “opens” on August 27.

The repositioning, according to Disneyland Paris, “is just one part of the ongoing Walt Disney Studios Park transformation, adding more immersion and showcasing recent Disney-Pixar storytelling and characters that guests know and love…This represents the first of four core zones that will exist in the Park, as development continues on new themed areas starting with Avengers Campus.”

Already a few minor changes to define the Pixar “zone” can be spotted in this newly-named area: a gate near Toy Story Playland now has some cool Buzz Lightyear wings and both character locations at the Toon Studio Plaza now display a generic Pixar design.

Unfortunately, the two Cars’ attractions are in two completely separate areas within Worlds of Pixar, leaving the story flow a bit disjointed, and The Monsters, Inc. Scream Monitors attraction over on the side of Disney Studio 1 is outside the Pixar land perimeters completely.

Promised for the new Pixar area are four food kiosks, with “new themed snacks and sweets such as Toy Story and Luca-inspired shortbreads and exclusive Worlds of Pixar donuts and cupcakes.” No new dining locations or boutiques have been announced for the land.

Rumors abound for the futures of “Toon Studio” and “Production Courtyard,” with some suggesting the two areas may be merged together to form one of the four “zones” Disneyland Paris has mentioned. Others suggest that the Hollywood “Theater District” concept may be revived for Disney Bros Plaza, where live entertainment venues abound, resulting in a “Studio/Hollywood/Theater District” zone.

Which of course, begs the question: If this Studio/Hollywood/Theater District becomes one zone, what exactly will be the “four zones” of Disneyland Paris’s Walt Disney Studios Park? We know now both Worlds of Pixar and Avengers Campus….and prior to the pandemic, Disney announced that both Star Wars: Galaxy’s Edge and Frozen Kingdom of Arendelle were coming to the lake area of the Park…?

Since reopening, Disneyland Paris has made no further announcements regarding their expansion plans, so for now, the question remains unanswered. But with the creation of Worlds of Pixar, the transformation of Walt Disney Studios at Disneyland Paris is beginning to immerge.