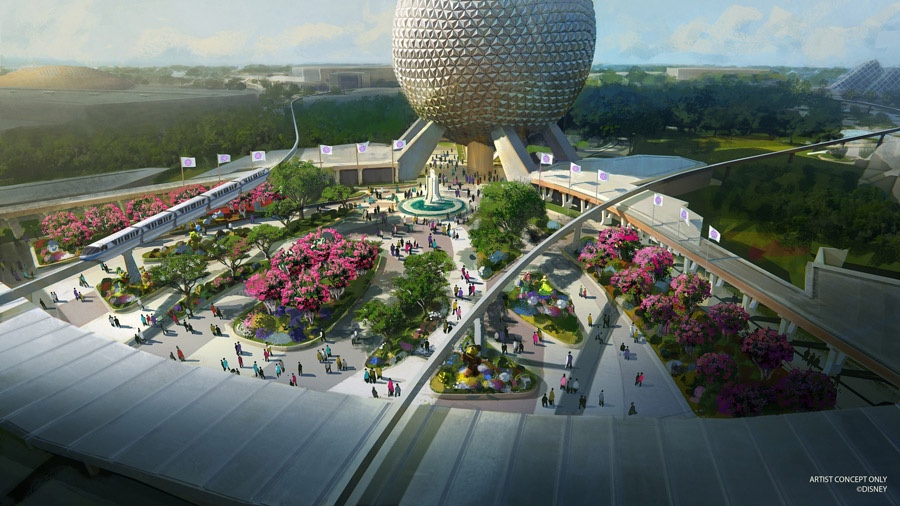 There’s been no shortage of rumors and conjecture swirling around the Disney Parks community over the last few days. With Disney’s new press release they seem to have blown a major hole in one of the predominant theories about what’s going to happen to some of Epcot’s most iconic pavilions. Here it is from the horse’s mouth:

•“The park’s core reimagined: You’ve already heard about the transformation taking place just inside the park’s entrance, where we will be enhancing the area with lush green spaces and classic touches. At the Expo, we’ll share more about what’s coming to the core of the park on the opposite side of Spaceship Earth. New areas will be flanking the iconic attraction, and we can’t wait to share the details with you.

•A new – but classic – look to match our offerings: Longtime fans of Epcot are familiar with the pavilion icons, like the ones you see here for Imagination!, The Land and The Seas with Nemo & Friends. With new experiences like the previously announced play-themed pavilion joining these Epcot staples, don’t you think we need some new icons to match? More will be revealed at the Expo!

•More about what makes Epcot, Epcot – Epcot is special for a lot of reasons – as one of Walt’s final projects, as an exclusive part of the Walt Disney World Resort, and as home to millions of memories from generations of guests. As we charge ahead with the park’s evolution, the architects of Epcot’s future are working to preserve all the elements that make this park so special while also evolving it to be more Disney, more family, more relevant and more timeless. At the Expo, you’ll hear more about experiences that are uniquely Epcot – for example, the updated films coming to Future World and World Showcase, as well as new dining experiences being added to the menu of ‘the foodie park.’”

Why, asks this reporter, would Disney bother designing new logos for pavilions they plan to bulldoze? Something doesn’t add up here, and I think we know what that thing is.